Situated in the Barcelona district Sant Martí, the Poblenous neighborhood was the area with the highest industrial concentration in Catalonia at the end of the 19th century. During the last few years, this place has progressively transformed its streets and buildings into improvised canvases on which the likes of artists Sebastien Waknine, Fabrizio Bianchini (Jupiterfab) and Stefano Phen have expressed themselves and created works of art. Nowadays, this neighborhood is one of Barcelona’s most active and dynamic, in addition to being a cultural and artistic point of reference thanks to the constant transformation it’s recently undergone. Its streets are a mix of styles and cultures, where locals and tourists share the industrial and cosmopolitan essence of the zone that has been transformed into the Catalan capital of Street Art.

Street Art is the term that defines one of the most important forms of contemporary art, which is currently practiced by using building walls, highways and urban furniture or decorations as surfaces on which to draw and paint. It simultaneously generates and maintains an inspirational element. Artists that practice this type of expression use tools such as spray paint, adhesives or stencil – a type of decoration involving shape tracing – and these formats can be seen frequently along Barcelona’s (in particular Poblenou’s) streets.

In this sense, the Catalan capital finds itself on the same level as that of London or New York – in fact, many artists recognize Poblenou as the Brooklyn of Barcelona, comparing its atmosphere with that of the famous New York neighborhood. However, over the course of the past few years, laws against vandalism have become stricter, becoming reason enough for many former Barcelona-residing artists to move elsewhere to continue developing their creativity. On the other end of the spectrum, organizations and platforms like RebobinART have been introduced to solve this problem, allowing for artists to obtain legal permits and providing support. As a result, this old, working-class neighborhood has been able to maintain its outdoor artistic laboratory, where street artists take advantage of antique, abandoned factories to express and embellish.

Many of the graffiti and related works that pertain to this movement can be observed by taking a nice stroll through the area’s streets, classic examples being where Calle Marruecos intersects Espronceda, and Calle Pallars. If you prefer portraits instead of artistic drawings, head to Calle Almogàvers and Roc Boronat, where the fun faces of Poblenou’s residents can be found.

Drawings are not the only things taking over varying buildings’ abandoned façades; many artists chose to express themselves by pouring out words onto the neighborhood’s walls. For this reason, you can find many urban canvases painted with phrases like “passions are the travels of the heart,” reflecting key moments lived by the artists who wrote them. 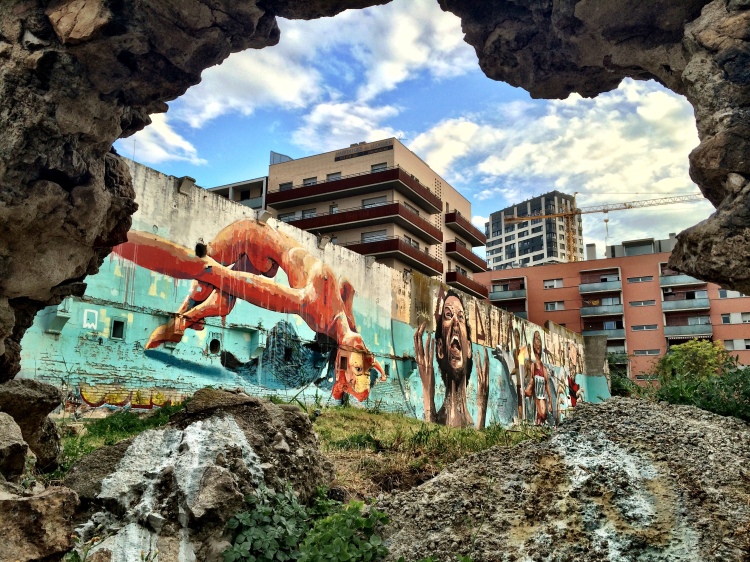 Poblenou has become a cultural guide within the Street Art world and in recent years, different neighborhood associations have begun to organize events to promote local artists, or simply to bring attention to the most artistic and colorful part of the area.

In a district with characteristics like the ones Poblenou boasts, creativity always reigns, feeding into important urban events like Open Day, an event organized by the Poblenou Urban District in which many local spaces unite to offer a variety of cultural proposals. There are also various routes featuring murals and artistic displays that have in turn become attractive to tourists. Among these murals are the featured faces of Now Poblenou, a social project whose mission is to strengthen the district through the voices and stories of its inhabitants. Talking with Fabrizio Bianchini, the project’s creator, we got a closer look into life within the neighborhood and the significance of the Street Art that characterizes its streets; according to him, “the murals are one of the three principal axes of the project: interviews, murals and a documentary component. Without a doubt, it was the most direct way to speak to people.” This highlights the importance of visibility in order to generate knowledge.

Artistically nicknamed Jupiterfab, Bianchini invites us to get to know more about his social projects on his website, where Now Poblenou is featured and highlights his neighborhood: “I felt really attracted to it (Poblenou), and as a result, I wanted to explore its spatial entergy and its uniqueness.” Upon asking him how he would define Poblenou in his own, few words, he says it is “a neighborhood in construction, in transition, with a powerful soul, with a caring and tenacious character.” Taking a look at Street Art in this light, the most important aspect of this form of art is that it remains alive within the neighborhood, giving its surroundings color and evolving it, generating a constant interest in its followers and in its very own neighbors, who are its greatest protagonists. By giving power to its people, this art transmits power to the neighborhood as well and in this way, it manages to move and speak beyond its spatial limitations. 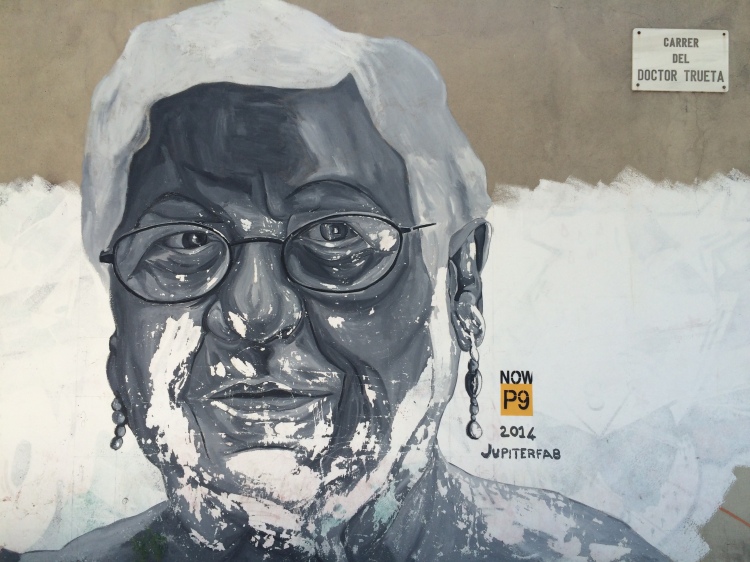